On November 18th, UW-Madison Ethics Bowl received 3rd place at the Upper Midwest Regional Ethics Bowl tournament in Rochester, Michigan. The members of the team were Sara Rabon, Tye Swokowski, Lucy Holt, and Lauren Davidson. Because this was the first time the team had been to regionals in a few years, all of our members were new to the collegiate level and had little idea what to expect. However, our team went on to win against four random opponents in four separate rounds and earn high scores in each round.

During our debates, the moderator gave our team a question based off one of the cases we had been studying for several months. Once our presentation had ended, we had to answer questions from our opponents and judges concerning our stance on the electoral college, CDC quarantines, storytelling in podcasts, and hormone testing in the Olympics. On the other side, we each encouraged our opponents to consider other perspectives after they finished presenting their ideas. At times, our members disagreed with each other on our collective stance, but an important piece of Ethics Bowl is working as a single entity.

Our team chemistry often turned into our greatest strength during round. This chemistry seemed natural to each of us, most likely because we are all friends outside of the team. It, therefore, felt normal to refer to each other by our first names, to pass off to each other without stuttering, and to understand how to clarify each other. We faced teams that had members who did not speak during the entire round, which is not inherently bad, however because Ethics Bowl wants to encourage collective discussion, it worked in our benefit to have such natural chemistry. 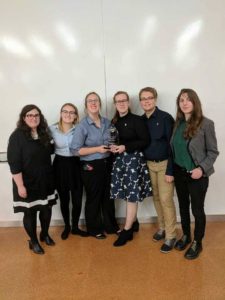 Outside of round, the teams we faced were incredibly kind and wonderful to speak to. Many of them had been going to regionals for years, so we considered it valuable to gain their opinion on the tournament. Being novices, we had no idea how the teams in this tournament stacked against those in years past. We also found it interesting to be representing not only the University of Wisconsin, but also public schools in general. Most of our opponents came from private schools, where the school atmosphere is incredibly different than ours in Madison. So, we believed it to be valuable to see how the other half lives, and I am sure that the other teams felt similar about their interactions with us.

All in all, the months of hard work placed into this tournament turned our notice team into successful Ethics Bowl debaters that are on our way to Nationals in March.