In 2017, Dr. Todd Allen returned to the UW-Madison campus after a series of admirable roles and accomplishments in the field of science and technology.  Allen was previously on the faculty from 2003-2012 and is currently a Professor of Engineering Physics at the University of Wisconsin-Madison and a Senior Fellow at Third Way, a DC base Think Tank, supporting their Clean Energy Portfolio. During his time away from Wisconsin, he was the Deputy Director for Science and Technology at the Idaho National Laboratory. Allen also has served as the Scientific Director of the Advanced Test Reactor National Scientific User Facility at INL and was a Nuclear Engineer at Argonne National Laboratory-West in Idaho Falls. He was also an officer in the United States Navy Nuclear Power Program prior to completing his graduate work.

Allen joined The Holtz Center in 2018, to help his field of nuclear energy thrive in the 21st century – “it requires innovation in technology, policy and social studies”. The Holtz Center is designed to encourage these interdisciplinary approaches and Allen believes that this is a great place for him to expand his thinking. 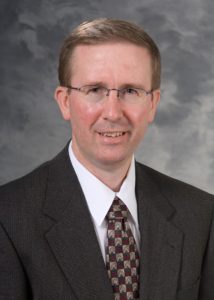