During the 2017-2018 academic year, while on sabbatical, Professor Dan Hausman has been a Ludwig Lachmann research fellow at the London School of Economics. He has been studying the explicit use of cost-effectiveness information by the U.K.’s National Institute for Health and Care Excellence (NICE) and has been writing essays that bear on the ethical appraisal of relying on cost-effectiveness information to allocate health care.

While in London he managed to capture the following unusual blizzard scene from the window of his office.

Dan Hausman is a Professor of Philosophy in the College of Letters and Science and member of the Holtz Center for Science and Technology Studies. 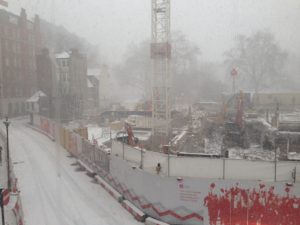