With support from the Holtz Center, William Voinot-Baron spent twelve months in the Alaska Native (Yupiaq) village of Naknaq (pseudonym) in western Alaska conducting research on the consequences of state and federal subsistence fishing regulations for Naknaq sovereignty and well-being. Positioning Chinook salmon as matters of care by which (and with whom) Naknaq tribal citizens make meaning and reproduce meaningful relationships, he articulates how his interlocutors’ (in)ability to fish points to the fragility of the wider social world. His research also demonstrates how divergent ethical orientations to fish and understandings of care shape the present politics of fisheries management in western Alaska in which Alaska Natives are systematically and structurally marginalized. Engaging with care at the intersection of fisheries management and everyday life, Voinot-Baron fleshes-out the present possibilities and limits of care among Naknaq tribal citizens and Alaska Natives in general.

As Alaska Natives lack territorial sovereignty, Voinot-Baron foregrounds how time, more than territory, becomes salient for Naknaq tribal citizens for whom “taking care of fish,” which includes cleaning, cutting, drying, and smoking, is not only time-sensitive, but also sensitive to ways of keeping time. Moreover, William shows how biological premises of “conservation” and fisheries “management” elide the social, spiritual, and temporal relationships that Yupiaq people reproduce with humans and nonhumans through fishing. While Naknaq tribal citizens’ practices of caring for fish exist in tension with the temporalities of State of Alaska and federal fish and wildlife managers, my research illustrates how Naknaq tribal citizens must work within and against the temporal and discursive bounds of settler law to temper the ways that they are limited by a lack of territory. In so doing, he argues that his interlocutors challenge territory as the ground of tribal sovereignty.

William’s research also forces attention on the debilitating effects of fishing regulations as they are felt at the level of the individual as well as at the level of kinship. Specifically, he suggests that elders’ and parents’ common concern about a “lack of discipline” among tribal youth is rooted in the paralyzing feeling of being, at the level of the tribe, themselves subjects of settler modes of discipline such that they are hindered from effecting discipline on their own terms. In other words, fishing regulations make untenable a form of discipline that Naknaq tribal citizens experience as care. Thus, Voinot-Baron argues that worry about a lack of discipline among youth points not to specific adolescent behaviors but rather to the (dis)ordering of social life across multiple generations. Figuring Yupiaq subsistence fishing as a form of care that settler law renders illicit, his research registers the social and psychic effects of the feeling of being criminalized. Extending questions of care beyond clinical and human domains, and beyond a focus on discrete practices, he ultimately takes up the questions of Yupiaq personhood and belonging. 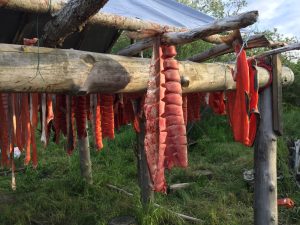