In the spring of 2018, Holtz Center Member, Lisa Cooper published her essay, “Figures for ‘Gretter Knowing’: Forms in the Treatise on the Astrolabe”, Chapter 5 of Chaucer and the Subversion of Form, ed. Thomas A. Prendergast and Jessica Rosenfeld (Cambridge, UK: Cambridge University Press, 2018), 99-124. Cooper’s essay seeks to elucidate the conjuncture of literary art with science in Chaucer’s Treatise on the Astrolabe, one of the earliest of technical treatises in English. Turning in part to Caroline Levine’s recent work on wholes, rhythms, hierarchies, and networks, and noting the centrality of those very forms to premodern cosmology more broadly, it argues for seeing the Treatise as an education in and drama of overlapping forms, one in which its readers must participate as they look to more securely anchor themselves in the cosmos. Demonstrating that the concatenation of forms in the manual operates in the service poetic as well as practical ends, it further argues for seeing the Treatise as an integral part of the Chaucerian corpus rather than as a curious outlier.

Lisa Cooper is an Associate Professor English and member of the Holtz Center for Science and Technology Studies. Her research and teaching span the 12th-15th centuries in western Europe — specifically England, France and Italy. 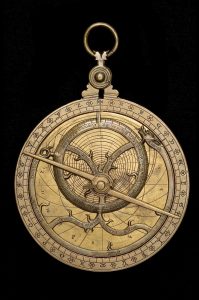