Madeleine (Madi) Pape was recently announced as the 2019 recipient of the Hacker-Mullins Student Paper Award, for her paper titled “Expertise, Epistemologies of the Body, and the Institutional Enactment of the Binary”. This honor is awarded by the American Sociological Association’s (ASA) Science Knowledge and Technology (SKAT) section. SKAT has close to 600 members and promotes scholarly research and professional activity in relation to the sociology of science, knowledge, and technology.

The section also awarded June Jeon a Hacker-Mullins Graduate Student Paper Honorable Mention for his paper, “Invisibilizing Politics: Accepting and Legitimating Ignorance in Environmental Sciences”. Jeon was also awarded a Brent-Marshall Graduate Student Paper Honorable Mention from the Society for Study of Social Problem’s (SSSP) Division of Environment and Technology for this paper.

Madeleine Pape and June Jeon were both very involved in Holtz Center activities throughout their graduate careers at the University of Wisconsin. “We are very excited to see their research receiving recognition at ASA”, states Lyn Macgregor, Associate Director of the Holtz Center. The Holtz Center has supported Pape and Jeon’s work through various awards and honors.

Pape wrote earlier versions of her paper while supported by the Holtz Center through a summer fellowship. She also received top-up fellowships to support her research on this and related papers, which are now part of her dissertation. Madi completed a PhD minor in Science and Technology Studies (STS) and is a PhD candidate in Sociology. Pape believes that her exposure to STS and the courses taken through the Holtz Center, combined with access to an interdisciplinary campus community, have become central to her research and writing. She enjoys being able to move between and bridging feminist/gender scholarship circles and the STS community on the UW-Madison campus. Pape states that she is developing her most distinctive contributions as a scholar of gender, science, and regulation. 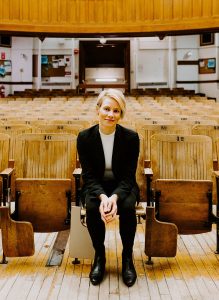 “This paper and indeed my scholarly trajectory as a graduate student has been heavily influenced by my involvement in the Holtz Center and Science and Technology Studies (STS).”, states Pape. “When I discovered Feminist Science Studies, and critical feminist engagement with scientific claims about biological sex difference, I knew I had found the area of scholarship that I wanted to be contributing to. Because of my background as an athlete, I am simply fascinated by bodies. I think I could have been a surgeon in a past life. Combining STS with my other intellectual home, sociology of gender, has enabled me to explore the relationships between bodies, gender ideology, science, and institutions in – I hope – novel and timely ways.”.

Jeon’s academic interests span the intersection of science and technology studies, environmental sociology, and social theory. He investigates how state power and the market system co-organize scientific institutions, and how the mode of production of scientific knowledge in such institutional contexts systematically fails to address the problem of social and environmental justice. He believes that rigorous training through the Holtz Center and an accessibility to interdisciplinary and supportive intellectual community on the UW-Madison campus have shaped his academic career.

June Jeon is a PhD candidate in Sociology and Environmental Studies. He completed his PhD minor in Science and Technology Studies. He was a summer scholar during both summers of 2016 and 2019 and further received top-up fellowships from 2016-2017. June also co-chaired the graduate committee of the Annual MidweSTS Conference, which the Holtz Center hosted last fall. Jeon will be presenting his work at annual meetings of the American Sociological Association, the Society for Study of Social Problems, the Society for Social Studies of Science (4S), and the Agriculture, Food, and Human Value Society over the summer. 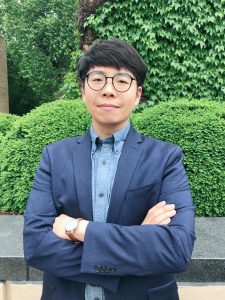 Pape will be honored at the ASA meetings in New York City in August. As the 2019 recipient, she will also receive a plaque of recognition and a monetary prize. Madi has made many wonderful relationships through the SKAT community and appreciates how supportive the group has been to junior scholars. She holds two previous recipients of the award –Kellie Owens and Savina Balasubramanian, both of Northwestern University in high regard. She will continue to follow in their footsteps, when she begins a postdoctoral fellowship through Northwestern University’s Science in Human Culture Program. She is looking forward to deepening her engagement with the regulation of sex and gender inclusion in biomedicine.

Description of “Expertise, Epistemologies of the Body, and the Institutional Enactment of the Binary (forthcoming, Body & Society)” (Madeleine Pape)

This paper, which is forthcoming in Body & Society, takes up a topic that has been getting a lot of attention in the media lately: the regulation of women athletes with naturally high levels of testosterone. Back in 2015, I participated as a witness in an appeal of the Hyperandrogenism Regulations for international track-and-field, which was brought to the Court of Arbitration for Sport in Switzerland by Dutee Chand, a young Indian sprinter. Her case was important, because although the decision was favorable to her in the short term (the regulations were suspended for two years), it nevertheless established the legitimacy of testosterone as the basis for regulating women with sexual development. I was fascinated by how that was allowed to occur, given there was clearly no scientific consensus about the precise relationship between naturally occurring forms of testosterone and athletic ability in women. In this paper, I offer an analysis of the Dutee Chand case and develop a theory of how expertise and the binary body are co-produced. I suggest that the binary body, as we experience it, is produced via expert debates; but expertise, too, is achieved via specific representations of the body. In the Chand case, I show that there was a simultaneous narrowing of expertise and the body such that only those expert accounts representing the body in terms of a strict male/female body were granted epistemological authority.

I became interested in the topic of regulating women in high testosterone because of my background as an athlete. In 2009 I competed for Australia in the 800m at the World Championships in Berlin, and I raced in the same heat as Caster Semenya, the South African athlete who has been most associated with this issue in recent years. And in fact, it was at those championships that the international governing body for track-and-field announced that they were to be conducting investigations into Semenya’s biological sex, an announcement that prompted intense media and public scrutiny of Semenya and her body. When I moved to the US to do my PhD in Sociology a few years later, I discovered the vast body of feminist literature critiquing the regulation of women with differences of sexual development, and saw an opportunity to bring a unique voice to that literature, given my background and experience in Berlin. 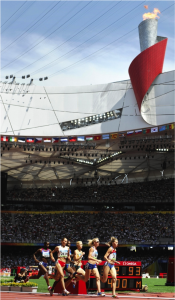 This paper (forthcoming in Social Studies of Science) investigates the issue of the political economy of science, particularly focusing on how power shapes knowledge and ignorance. Based on ethnography and interviews, the paper examines how scientists comfortably abandon the unfunded research projects, leave it undone, and migrate toward the fundable research projects. It especially highlights how scientists, who have been nurtured in a meritocratic academic culture, survived during Trump administration’s anti-environmental science policy by reframing their research programs. I began to observe scientists from 2016 and was able to study how changes in science policies impacted laboratory scientists. It intrigued me that scientists were conveying various strategies to make their research programs survive. In this paper, I show that those survival strategies by scientists are deployed and legitimated with a logic of scientific merits; however, they unintendedly align their scientific projects with the interest of political and economic power. Such political and economic forces, choreographing the mode of scientific practices, are ‘invisibilized’ to scientists because their fundamental perception of the ideal science is already deeply constructed by those forces. Ultimately, the paper argue that the mechanism of social control of scientific knowledge transcends the matter of resource allocation (e.g. funding changes)—it is actualized via a long-term construction of scientists’ internalized rules of the game in the scientific field.

My undergraduate training in chemistry initially shaped my research interest in laboratory studies. When I worked in a chemistry lab, I was fascinated by myriads of social contexts where science labs are located. During my training in sociology and STS, I realized that political economic analysis of scientists in the lab bench was a terra incognita. My future research projects will further challenge in this important pathway.