Lucas Richert hasn’t even been on the UW-Madison campus for a full year, but he is already making a big impact during the brief eight months since his arrival from the University of Strathclyde in Glasgow, Scotland. There he was a Chancellor’s Fellow in History.

Arriving on campus in January, Richert has had an eventful year already, connecting with others on his new campus and authoring two new books. Releasing two brilliant books during Richert’s transitional year, you could say that he and his research are creating quite the buzz on campus – and on social media.

His latest book, Strange Trips has been well-received by colleagues internationally. Richert investigates the myths, meanings, and boundaries of recreational drugs, palliative care drugs, and pharmaceuticals as well as struggles over product innovation, consumer protection, and freedom of choice in the medical marketplace. Weaving together stories of consumer resistance and government control, the book offers timely recommendations for the future of drug regulation.

You are able to pre-order his upcoming book, Break on Through (to be released October 2019). The upheavals of the 1960s gave way to a decade of disruptions in the 1970s, and among the rattled fixtures of American society was mainstream psychiatry. In the book, Richert investigates the radical challenges to psychiatry and to the conventional treatment of mental health that emerged in the 1970s and the lessons they offer for current debates.

Luc also recently joined the Holtz Center Membership from the School of Pharmacy’s Social and Administrative Sciences Division. He is an Associate Professor in the SOP, but has also taken on a dual role as the Historical Director of the American Institute of the History of Pharmacy. This organization, affiliated with UW SOP, has been in operation since 1941.

He was more than enthusiastic about becoming a member of the Holtz Center earlier this year. “The Holtz Center embodies many of the principles I think are valuable in academia. It encourages fresh, cross-cutting thinking and it reaches outwards.”, he states. “And, I wholeheartedly agree with former Chancellor John Wiley, when he noted that “new areas of knowledge and complex social issues do not fall neatly into departmental disciplines and structures.” So the Holtz Center is a significant group to be a part of!”

Luc is a trained historian, with his work in the field addressing intoxicants, pharmaceuticals, and mental health. Some of the topics his research explores include psychedelics, cannabis, and the practice of mental medicine. Over the years, he feels extremely lucky to have found terrific role models in the field of alcohol and drug studies, as well as the history of pharmacy and pharmaceuticals. Luc proudly describes himself as an interdisciplinary researcher. 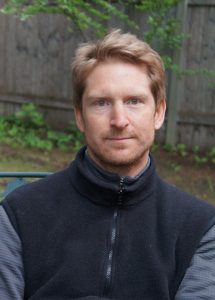