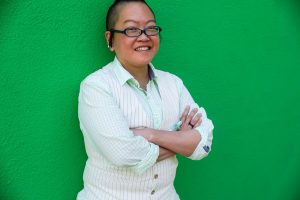 What we call meat has become a contentious issue in the United States. This article is the first to explore the many dynamics behind meat labeling laws proposed by various state legislatures. It uses food studies methods to places those debates within a larger context of the history of “meat,” plant-based proteins, cell-cultured proteins, and insect-based proteins, as well as other food labeling struggles. The article ultimately argues that expressly recognizing these dynamics can augment sustainable food advocacy efforts in the future.

Tai, will be among the panelists and experts, at the Holtz Center’s October 29th event at Oregon Public Library. The event panel at “What is Food and Who Decides?: Current Debates about Milk and Meat” will also feature Scott Rankin (Food Science), Jeff Sindelar (Animal Sciences) and Monica Theis (Food Science) . The event will be moderated by Holtz Center Director, Noah Weeth Feinstein.