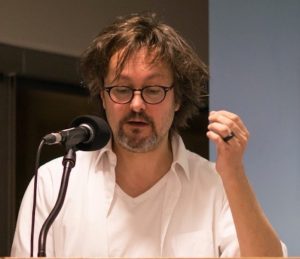 The Holtz Center recently welcomed Frédéric Neyrat, a French philosopher to its membership, which is approaching 100 diversified members from various areas of science and technology studies from across the UW-Madison campus. Neyrat has been a member of the UW-Madison community since 2011, and is currently an Associate Professor and Mellon-Morgridge Professor of Planetary Humanities in the English department, which he joined earlier this academic year. His interests include theory, environmental humanities and political theory. He also serves as the editor of the electronic platform Alienocene and is a member of the editorial board of the journals Lignes, Multitudes, and Terrestres.

Neyrat’s current research deals with what he calls “Planetary humanities”, that is to say the encounter between environmental humanities and planetary science.

“Planet Earth” he argues, “is both a global ecosystem in which nature and technologies are entangled and a cosmological entity belonging to our solar system”.

Neyrat’s current book project, The Planetary Condition, calls into question Anthropocene studies’ dominant geocentrism, a geocentrism evident in these studies’ tendency to focus solely on Gaia and her terraforming Anthropos, and also in New Space’s utilitarian conception of the universe, which focuses narrowly on how to exploit extraterrestrial resources. As photosynthesis already demonstrates, the sun is not just “outside,” but –through plants—an inside and indispensable part of terrestrial life. But with climate change, it’s necessary to see Earth in relation with the cosmos: Comparing Earth’s climate to other planets’ climate systems is actually necessary to identify the specificity of our planet so that we can avoid a global climate catastrophe. To contest the split between Earth and the cosmos, his book opens environmental humanities to the planetary dimension, showing that Earth is both a cultural, technological, environmental reality, and a stellar body belonging to the universe. Professor Neyrat’s book therefore produces the missing link between the “geological turn” of Anthropocene studies and astrophysics, but is also the missing link between the pressing political questions that we need to address and the necessity to consider the long time of the universe.

Neyrat also recently published Atopias: Manifesto for a Radical Existentialism (Fordham, 2017) and The Unconstructable Earth: An Ecology of Separation (Fordham, 2018), which was one of two grand prize winners for the 2019 French Voices Award for Excellence in Publication and Translation.

You may learn more about Professor Neyrat’s research and STS contributions on his personal website Atopies.