Asymmetries in Global Information and Language Technology, 1800 to the Present

Whether for Arabic, Burmese, Chinese, Japanese, or otherwise, the history of linguistically embedded and mediated technologies such as telegraphy and computing defy conventional narratives of “technology transfer” or “diffusion” that have long guided our understanding of how industrial, military, and other apparatuses circulated from Western sites of invention to Non-Western sites of adoption. One could never simply “install” an Arabic typewriter, or “turn on” a Chinese word processor. Each required engineers, language reformers, and everyday practitioners to engage in long, often anxiety-ridden, and always asymmetric engagements with Latin alphabet-centric technologies, with the result often being the dramatic transformations of the Non-Western script in question (but, quite often, often with the subtle transformation of the technology as well).Prof. Mullaney will argue that it is time that the historiography, archives, and theorization of “information” reflects this history, its global dimensions, and the asymmetries that continue to be embedded therein.

Co-sponsored by the Holtz Center for Science and Technology Studies 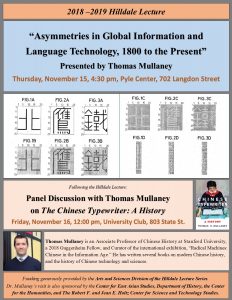 Thomas S. Mullaney is Associate Professor of Chinese History at Stanford University, and Curator of the international exhibition, Radical Machines: Chinese in the Information Age.

He is the author of The Chinese Typewriter: A History (MIT Press 2017), Coming to Terms with the Nation: Ethnic Classification in Modern China (UC Press, 2010), and principal editor of Critical Han Studies: The History, Representation and Identity of China’s Majority (UC Press, 2011). His writings have appeared in the Journal of Asian Studies, Technology & Culture, Aeon, Foreign Affairs, and Foreign Policy, and his work has been featured in the LA Times, The Atlantic, the BBC, and in invited lectures at Google, Microsoft, Adobe, and more. He holds a PhD from Columbia University.

He is also the Founder and Editor-in-Chief of Dissertation Reviews, which publishes more than 500 reviews annually of recently defended dissertations in nearly 30 different fields in the Humanities and Social Sciences.