Democracy against the law: Reflections on India’s illiberal democracy

Democracy against the law: Reflections on India’s illiberal democracy

Talk by Thomas Blom Hansen, Director of Center for South Asia and Professor in Anthropology at Stanford University

This event is free and open to the public. Refreshments will be served!

The political forces that ‘deepened’ India’s democracy in the 1980s and 1990s – regional movements, lower caste communities but also and Hindu nationalism – reflected among many other things a deeply illiberal underside of Indian politics. Theirs was a language of deprivations and anger, and a politics of passion claiming to represent hitherto voiceless majorities. This language of strength was not based on a commitment to liberal values of the Constitution but, rather, a realist belief in popular sovereignty, the moral right of electoral majorities, and violence as a legitimate expression of political will.

In this paper I firstly discuss the obvious discrepancy between the liberal language of rights in the Constitution and the largely illiberal and often violent ways in which the ‘force of law’ is visited upon non-elite Indians by the country’s police powers. Secondly, I argue that the thriving vernacular publics across India has enabled a new and intensified sense of intimacy and hurt that have facilitated the rise of a popular politics of passion and action that in turn has made public violence and the mobilization of public anger into some of the most effective means of political expression in the country. These sentiments and techniques of what I call ‘the law of force’ have been honed and perfected by the Hindu nationalist movement over the past decades.

Democracy Against the Law Poster 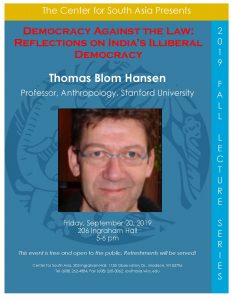