Humans as a model for animals: Patterning preclinical reproducibility reform after clinical research

In 2011 and 2012, two groups of pharmaceutical industry scientists published reports on their experiences attempting to reproduce results from the biomedical literature in their in-house laboratories. The first paper, from scientists at Bayer, reported that in 65% of cases they could not reproduce the results that had been published. The second, from scientists at Amgen, reported the even more dismal finding that their attempts to reproduce results failed in 89% of cases.

This talk asks why these two industry publications triggered what today has become known as the “reproducibility crisis” in biomedicine. The shock value of these figures alone and the subsequent attention they received in the popular press may make their importance seem self-explanatory. And yet these were not the first publications to report dire rates of irreproducibility, or to make headlines: John Ioannidis’s now famous paper, “Why most published research findings are false,” was published years earlier in 2005, and the New Yorker published an article on reproducibility in biomedical research with the attention-grabbing headline “The truth wears off” in 2010.

I argue that the reason these publications had such an impact on science policy makers is that they took a widely recognized problem—the problem of ‘translating’ basic science discoveries into clinical applications—and reframed it as a problem with the quality of the science rather than a problem of moving the science from bench to bedside. Framing the problem in this way positioned the pharmaceutical industry as defenders of good science, a helpful public relations move for an industry that had received much negative press in the 2000s because of attempts to manipulate and suppress unfavorable data. It also suggested that the same types of reforms that had been applied to the pharma industry—for example, requiring them to register clinical trials in advance so that negative findings were more difficult to hide—could be usefully applied to academic science. By patterning reforms for preclinical research after regulatory science, I argue that reformers are deepening alignments between industry and academic research, further contributing to what Mark Dennis Robinson has called the “financialization” of science. 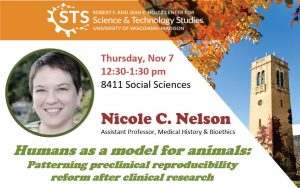