Pain and Pleasure: A History of Pharmaceutical Opioids in the Asian Context

The History of Pharmacy and the Social & Administrative Sciences Division present:

Pain and Pleasure: A History of Pharmaceutical Opioids in the Asian Context
with Ved Baruah

As the opioid crisis generates headlines, heated debates, and calls for tighter controls in the United States, in India another kind of dialogue is gaining traction: deregulation.

Opium had many uses in the Indian context for centuries. It was an important medicinal drug, widely used for ritualistic purposes and served as a popular recreational substance. In the first half of the twentieth century as opium lost its pharmacological lustre, the tide turned, and opiates became part of the international regulatory system. India devised some of the most stringent controls globally and by the 1950s, opium retreated into the illicit market space and users, both medical and recreational, turned to the grey market.

The tide is now turning once again. Over the last decade or so, debates about medical opiates and opioids have witnessed a resurgence in India. This is best illustrated by the one on the booming pain management clinic industry across the country. Originally catering to a whole spectrum of medical, palliative and end-of-life-care needs, these clinics are slowly being discovered by recreational users.

This talk will dive into the current debate on greater access to opiates and opioids even as reports of a looming ‘opioid crisis’ and the widespread misuse of pharmaceuticals in both urban and rural India generate arguments in favour of tighter controls on manufacture, supply and sale. Complicating the terrain further is India’s rising exports of opioids like tramadol that has been brought into focus by specialist and (increasingly) mainstream media outlets 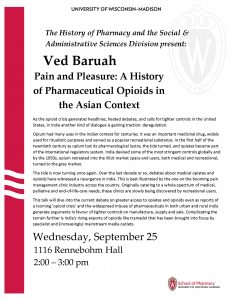