“Our politics is called agroecology!” the agronomist says emphatically. His usually placid smile is sharpened with a touch of acid, and he paces the front of the classroom in which he is giving a lesson on soil fertility. This agronomist is an organizer in one of Haiti’s oldest peasants’ movements, the Mouvman Peyizan Papay (MPP). This talk, part of a larger book project on the political ecology of racial freedom in Haiti, examines the intersection between scientific and political discourses around soil in 20th century Haiti. It looks first at the occupation of Haiti by US Marines between 1919 and 1934. The Occupation entailed the production of a body of scientific knowledge about Haiti’s environments, including extensive surveys of its soils and natural resources. A reading of these archival sources shows how characterizations of Haiti’s soils as fragile, degraded, and in need of improvement scaffolded the expansion of US empire into Haiti’s hinterland. The second part of the talk draws from an ethnography of MPP to show how the movement’s turn to agroecology in the 1990s challenged this imperial geography. It concludes by examining how agroecological conceptions of living soils inform conjoined processes of radical political and socio-ecological transformation in rural Haiti today.

Reading related to this topic:
Moore, S. S. (2017). Organize or die: Farm school pedagogy and the political ecology of the agroecological transition in rural Haiti. The Journal of Environmental Education, 48(4), 248-259. 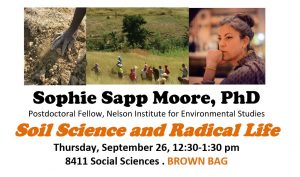